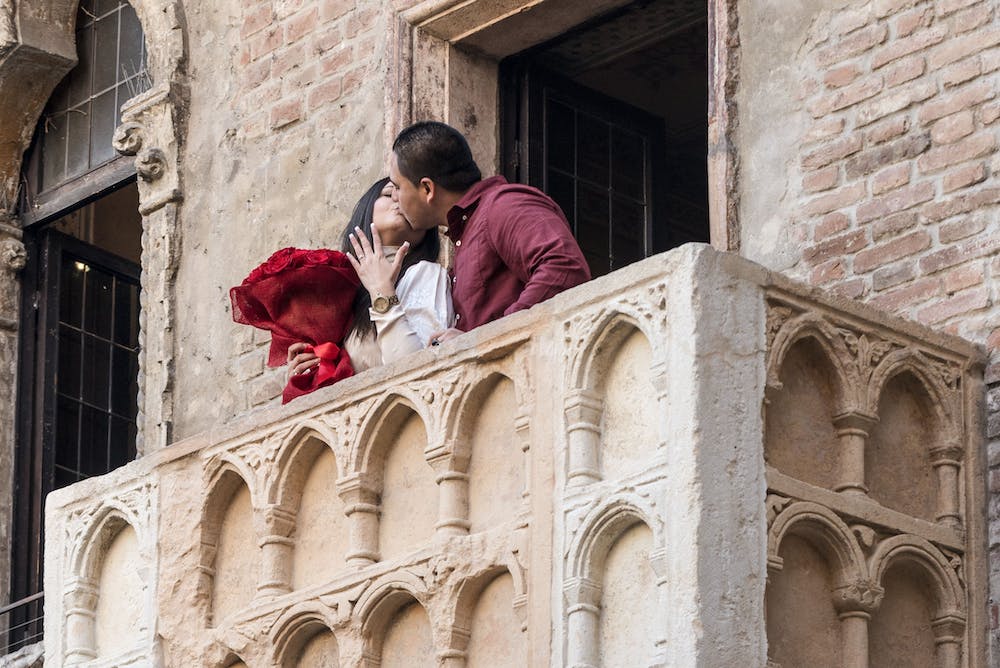 We all take as granted that Sir William Shakespeare was the first great artist in 1595 to write and publish the biggest (and maybe the shortest too) love story in the world about the young and beautiful Giulietta Cappelletti (translated in Capuleti/Capulet by Shakespeare himself) and the coolest heartbreaker ever Romeo Montecchi. This is what the entire world knows about Verona but the the love story par excellence started way back in the history in 1336 through the work of a very talented writer called Giovanni Boccaccio in a very bucolic borough of Verona, still nowadays called Montorio.

The Montorio Manor “Palazzo delle Logge” was the set for the secret love between Florio, an aristocratic guy from Verona and his beloved young lady Biancifiore. The love was secret and full of intrigues because Florio’s father thought that the young Biancifiore was not well born enough to merry his beloved son. This version first written by Giovanni Boccaccio in 1336 and set in Verona was resumed by Giovanni da Porto a writer from Vicenza and published only right after his death in 1531 with the intense title “La Giulietta”. The next year 1532 another well known local writer Matteo Bandello is even more specific about the plot, explaining his novel is about Romeo Montecchi and Giulietta Cappelletti and their really unfortunate love set back in the middle ages (1336) when Bartolomeo della Scala was governor of Verona. Their love was so tragic because the two families they belonged were so ancient enemies that even the Verona’s Governor participation was useless.

After Matteo Bandello‘s work became a big success, the novel has been resumed and published several times more in all the main cities around Europe such as the versions made by Arthur Brooke in 1562 and William Painter immediately after and published in London. It’s only in 1595 though that the novel stops all the different interpretations and finally discovers its best one through the elegant work of art made by William Shakespeare. Not only he took maybe one of the most successful novel around of the last 2 centuries and had the courage and determination of making a masterpiece of it, he certainly made “Fair Verona “one of the Love Capital in the world enriching its elegant historical centre of romance and magic.

This is why I decided to start my favorite Verona walking tour in Pizza Bra n.28 right in front of the only William Shakespeare statue existing in Verona’s centre. As member of the Veronese community I have a big debt with this artist and I can’t walk by without reading and thinking about his most intense lines engraved right near his statue on the Verona walls: “There’s no world without Verona walls, but purgatory, torture, hell itself. Hence banished is banish’d from the world, and world’s exile is death….” (Romeo and Juliet, 3rd Act, Scene 6).

These words in this position are even more meaningful if you think about the original medieval walls still standing right in front the readers after “only” 700 years. But this isn’t the only tragical love story happened in Verona. In fact even among the locals not everybody knows that in Corso Portoni Borsari street walking in the direction of Piazza Erbe when you see the building numbered 15 you should turn right and after about 10 steps on your left you’ll see the “Well of Love” a beautiful 16th century well made of the local marble stone. The legend behind this mysterious well says that around 1509 and 1516 a young good looking soldier named Corrado di San Bonifazio fell in love with Isabella a young lady fro the very aristocratic  Donati family from Verona. Isabella was very cruel with Corrado though and even if he showed her in many occasions his love and devotion she refused him all the times. One day they randomly met nearby the well in Vicolo San Marco in Foro because she was back from visiting her favorite church. Corrado, maybe sick of her irritating behavior said that her heart was frozen like the water in the well. Isabella seemed not offended at all and she challenged him to go and test personally the water  if he was so sure of it. Corrado, wounded in his pride immediately jumped into the well and disappeared in its frozen waters. Isabella suddenly felt bad and guilty and discovered she really missed him now thad he was gone so she couldn’t live with such a burden and decided to end her life in the well too and stay forever with her beloved Corrado. From that day this corner of Verona is called the well of love and lovers take pictures, hang lockers, write their name or simply sit on it (in the meantime the well has been closed for everyone’s safety).

Making a walking tour of Verona for me is not only admiring the beautiful monuments and tasting amazing local food, it’s also discovering all the legends and true love stories happened and written among this old fascinating streets.

Take a gastronomic Verona walking tour through the streets of the historic center. This Verona food tour lets you try local gourmet treats in ancient food shops, wine bars, and cafés, with plenty to eat…

Where to Propose in Italy: Juliet’s Balcony in Verona!

Looking for where to propose in Italy?  Let us help you celebrate your love on Juliet’s balcony in Verona with this unforgettable experience in Italy!

Where to propose in…

By clicking or navigating the site, you agree to the FareHarbor Terms of Service and Privacy Policy, and to our partners’ use of data related to your use of our website. Like other websites, we use cookies and similar technologies to collect that data in order to deliver personalized advertising based on your interests. See Our Use of Cookies to learn more about your rights and our partners. Dismiss