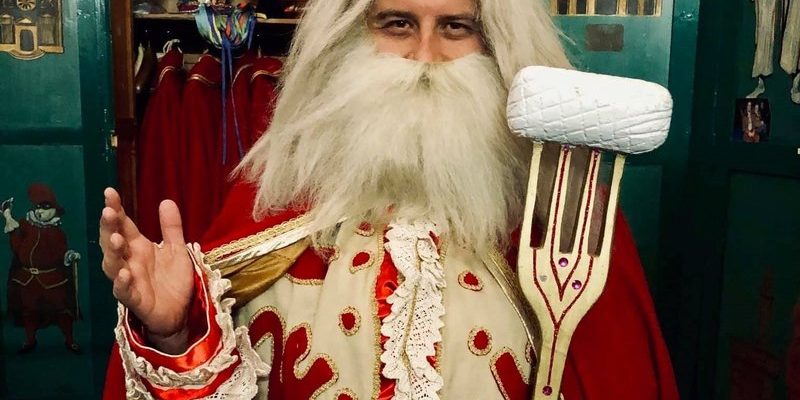 Romeo and Juliet guide for the “Washington post”! @VICKY HALLETT

Sebastiano Ridolfi tries on the costume of Papà del Gnoco, or “Gnocchi Dad,” the Santa-esque figure who’s the symbol of the gnocchi-themed pre-Lent celebration in Verona, Italy. Although Ridolfi didn’t win the election to be Papà del Gnoco, he was received warmly by the crowd and remains committed to challenging traditions.

Forget Romeo and Juliet. The most riveting love story out of Verona, Italy, is about another couple whose passion thrives today: the city and gnocchi.

You can find pillowy potato dumplings anywhere in Italy or, possibly, the planet. But it’s only here, in this former Roman colony perched on the Adige River, that the dish has inspired an actual holiday. It’s called Venerdì Gnocolar — in English, “Gnocchi Friday” — and it always falls during Carnival on the final Friday before Lent. This year, that’s March 1.

And one sure sign it’s approaching is the sight of a fat, bearded gentleman holding a huge bejeweled fork piercing the world’s largest (fake) piece of gnocchi.

Meet Papà del Gnoco, or “Gnocchi Dad,” the Santa-esque figure who’s the symbol of this celebration. He’s the crowned king of Verona’s Carnival, and he and his court of costumed assistants — who also wield oversize cutlery — head the city’s grand parade on Venerdì Gnocolar. But this is no monarchy. Each year, about a month before the big event, a new Papà del Gnoco is elected by the citizens of Verona in San Zeno square, the heart of the neighborhood where this tradition was born waaaaaaaay back in 1531.

It’s here — in the shadow of the Romanesque Basilica of San Zeno, dedicated to Verona’s always-smiling patron saint — that a terrible famine ended when a group of wealthy families distributed all the ingredients necessary to make gnocchi. (Not including New World potatoes, which were added to the recipe later.)

So today it’s where the parade that has commemorated this act of charity ever since ends in an all-night gnocchi party, explains Alberto Botturi as he sips white wine inside Osteria Abazia, which sits on the corner of the square. “This is the place to be in Verona for Carnival. It’s like the Super Bowl here,” says Botturi, who owns a movie theater at San Zeno. Sara Zaffani, who’s prepping appetizers behind the bar, chimes in that Abazia serves homemade gnocchi every day — three types: with tomato, with ragu, and with pastissada de caval, a horse-meat-based sauce that’s very Veronese.

This, naturally, sets off a conversation about gnocchi. Botturi is a butter-and-sage guy, although he notes, “I’m not against horse. That’s our heritage.” (Back when it was a poor, war-torn region, Verona didn’t let dead horses go to waste.) Then there’s another kind with cinnamon and sugar, but only old men like it, Zaffani says. Is gnocchi in Verona different from gnocchi anywhere else? Botturi wouldn’t know. He has never eaten it outside the city.

On the Friday before Lent, the people of Verona celebrate their love of gnocchi with a Carnival presided over by Papà del Gnoco and his court.

His most recent serving came just a few days earlier at the election festivities, where free gnocchi is available for all. It was a rainy morning and Botturi had to wait about 30 minutes in line at the polls, but he didn’t mind doing his part for tradition — partly because he was giving it a jolt.

That’s right, in 2019, for the election of Verona’s 489th Papà del Gnoco, the matchup included an openly gay candidate for the first time. Prior to the election, Sebastiano Ridolfi, a 36-year-old manager in a digital communications company, was best known for his local gay rights advocacy, as well as a stunt he pulled during the Venerdì Gnocolar parade two years ago. He donned a suit and a floppy blond wig, and he posed as President Trump. Flanked by a Melania Trump look-alike and a MAGA-hat-wearing “son,” Ridolfi proclaimed his intentions to build a wall. (His proposed structure would keep out the people of nearby Vicenza, which, incidentally, is home to a large American military base.)

He had such a blast that he decided to take his impression to the next level: Ridolfi campaigned for the position of this year’s Papà del Gnoco as Trump with the slogan “Make Verona Gnoco Again!”

What started as a joke quickly became serious for Ridolfi, who saw that his involvement could boost his city’s interest in the age-old contest. “This tradition was slowly decreasing,” he says. “I saw the possibility to do something different. My goal was to bring back the original spirit, but with a more contemporary style.”

Indeed, locals have noticed that Verona’s infatuation with its gnocchi-fueled festival has waned in recent decades. While Papà del Gnoco candidates once needed to be from the San Zeno neighborhood, a lack of entrants forced the rules to be loosened so they could be from anywhere in the city. “Carnival is now smaller, more contained,” says Virginia Conta, who runs the food tour company Romeo and Juliet Guide with Sara Valitutto. Both remember a more raucous bash in their youth, complete with teenagers pelting each other with flour and eggs. (Two ingredients in gnocchi!)

Outsiders may not notice anything amiss. “If you come on that Friday, you’ll find gnocchi is in every bar and every restaurant,” reassures Valitutto. And their groups are always pleasantly surprised by the spectacle of floats and dancers winding through the city streets — even if they are hesitant to try pastissada de caval. “It’s very tasty and made with wine. But there are people who feel it’s like eating dogs,” Valitutto says.

The problem, explains Valerio Corradi, president of Bacanal del Gnoco (the organization that runs this whole shebang), is that the event needs to evolve. His predecessor held the job for 55 years. “Everything happened automatically. There wasn’t anything new,” says Corradi, who took over three years ago. Although he doesn’t have much of a budget — virtually everyone who participates is a volunteer — Corradi has been gradually implementing updates, such as commissioning a catchy theme (“Verona, Verona”) from spiky-haired pop singer Sergio Cremonese, whose grandfather was a Papà del Gnoco.

Another recent initiative: the Carnival bus. In the weeks leading up to Venerdì Gnocolar, a decommissioned city bus that has been transformed into a rolling restaurant serves free gnocchi and red wine at stops all over town.

From left to right, an impersonation of Barron Trump in a Make America Great Again hat, Ivanka Trump, a cardboard cutout of Ridolfi when not in costume, Ridolfi in a Donald Trump costume, a Melania Trump look-alike and a man in a Secret Service costume.

At its first destination this season, the Borgo Venezia market, there’s a line to meet Papà del Gnoco and one of his sidekicks (called Macaroni, the previous name for gnocchi). Upon closer examination of the person wearing the bushy white beard and elaborate costume — an ivory and red ensemble adorned with lace and stuffed full of padding — it’s not one of this year’s candidates. “Once you become Papà del Gnoco, you are always Papà del Gnoco,” explains Arnaldo Leso, 73, who was elected in 1995. There are too many public appearances for just one guy, so former winners pitch in when necessary.

He has been doing this for decades, but the San Zeno native is still excited to smile for photos with babies and, of course, talk about a certain food. “Now in these days, the moms and grandmas are all making gnocchi by hand,” Leso says. Two retired teachers sitting nearby, Louisa and Carla, nod in agreement while they chow down on their bowls of gnocchi, generously covered in donkey-meat ragu. (Yep, another Veronese specialty.)

To the younger generation, this devotion of time and effort to Verona’s rituals can seem bizarre. “You can’t believe that people take it that seriously,” says lawyer Alberto Lorusso, a friend of Ridolfi. But after delving into this world of costumed craziness for the election, he has a new appreciation for Carnival and the volunteers who make it happen. Why do they do it? “They have a heart that’s so big,” Lorusso says.

This year’s campaign proved to be more controversial than any in recent memory, as far-right politicians argued that there shouldn’t be a gay Papà del Gnoco. That led to an opposing outcry for inclusion. Ridolfi boasts that he even got an endorsement from Stuart Milk, nephew of the slain civil rights activist Harvey Milk.

A young boy shows his spirit by dressing up as Papà del Gnoco and wielding an oversize fork spearing a giant piece of gnocchi.

“Everything was sleepy here,” Ridolfi says. “But the fight between us lit up something new for the Carnival and the city. It’s the best edition ever, as Trump would say.”

By “us,” Ridolfi means his opponent, 47-year-old video-maker Francesco Gambale, who sports a real — and impressive — white beard and takes his gnocchi with pastissada de caval. (Unlike Ridolfi, who goes for Gorgonzola.) Despite being the more traditional candidate, Gambale embraced the unconventional campaign. “Together, we managed to approach many people not at all interested in Carnival before,” he says. For proof, just look at the record turnout on that rainy election day. More than 7,000 people voted, and hundreds more were still in line when the polls closed.

Two days later, both candidates meet again at the Palazzo della Gran Guardia, which stands across from the city’s Roman Arena on Piazza Brà. This is where the parade will start on March 1. But up first, a packed auditorium awaits the coronation of the victor: Gambale.

A marching band, majorettes shaking pompoms and regional “royalty” (or, at least, folks dressed up like it) welcome him to a gold armchair. He grips his fork scepter throughout a series of speeches, as well as an aerial silks performance recalling the story of the Verona Carnival. It gets frenzied and aggressive when reminding viewers of the famine and near revolt, and then it turns joyous and graceful as gnocchi restores the peace, leading to Verona’s happily ever after.

That feel-good mood continues as Ridolfi gets invited onstage for a hearty round of applause and after the ceremony, when Gambale poses for photos with well-wishers. (Before each flash: “Uno, due, tre, gnocchi!”) Then everyone heads upstairs for — what else? — a gnocchi feast.

Will Ridolfi run again? “Let me sleep for a while, and then we’ll see,” he jokes. But he has certainly developed a taste for challenging the status quo. As he ponders the future, he envisions other candidates he could help. “Traditionally, you have to be male to run, but that is something I would like to change,” he says. The same is true of the Macaroni, Papà del Gnoco’s loyal sidekicks. They were originally the male heads of families, but he sees no reason it has to remain a boys club today.

“Carnival is quite conservative,” Ridolfi says. “But as the best traditions, it adapts.”

Vicky Hallett is a freelance writer based in Florence, Italy.

Any cookies that may not be particularly necessary for the website to function and is used specifically to collect user personal data via analytics, ads, other embedded contents are termed as non-necessary cookies. It is mandatory to procure user consent prior to running these cookies on your website.